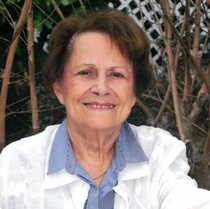 Services will be held on Thursday, December 15, 2016 at St. Bernard Catholic Church in Breaux Bridge at 11:00 am. Reverend Monsignor Keith Derouen, pastor of Our Lady Queen of Angels Catholic Church in Opelousas will celebrate the mass and conduct the funeral services. Interment will follow at St. Michael’s Cemetery in Henderson alongside her husband and parents.

A native of Henderson and longtime resident of Breaux Bridge, Grace was born the daughter of Atchafalaya River merchants in Krotz Springs. Her life was a course on overcoming adversity and striving for better for her family. She became a parent at a young age, and with five children in tow, followed her husband and his naval career to Lafayette, Green Cove, Florida, Albuquerque, New Mexico, Austin, Texas, New Orleans and back to Breaux Bridge.

The former owner of Amy's Grocery and Fisheries in Henderson, Grace retired from commerce in 1996. An expert seamstress, Grace fashioned numerous First Communion, homecoming and graduation dresses for her daughters. She loved music, art, popular literature, dancing and traveling and visited many foreign countries with her husband, Bob. She enjoyed entertaining and was part of an informal Breaux Bridge supper club. Entertaining frequently, her home was always beautifully appointed and decorated by her skilled eye. She also loved gardening and took up painting later in life.

Grace served in the Crawfish Festival Association and was a member of the Krewe of Zeus and Krewe of Victoria and portrayed Coco Chanel in their 2003 tableau. She was also a friend to the humanities and supported the Lafayette Symphony Orchestra. She served God as a member of the Louisiana Theresians Joie de Vivre Community of Breaux Bridge.

To order memorial trees or send flowers to the family in memory of Mary "Grace" Irwin, please visit our flower store.