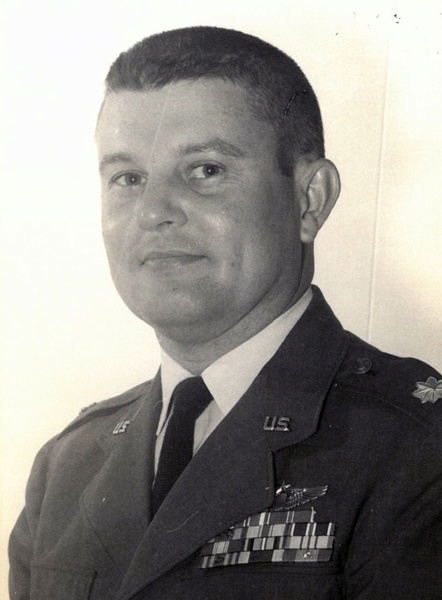 Our beloved husband, father, brother and friend, Merlin Chapman Smith, Jr., Ret. USAF Col., peacefully departed us after a lengthy illness January 12, 2018 with family at his bedside.
A Mass of Christian burial will be held at 11 a.m. Tuesday, January 16, 2018 in the Sunrise Chapel at Walters Funeral Home.  Lectors will be Kristopher Hallam, a grandson and Donell Cook Totaro, a niece.  Gift Bearers will be his daughters. Inurnment will take place in Arlington National Cemetery in Arlington, Vir.
He will be sadly missed by his wife, Elizabeth Shamp Smith and three daughters; Catherine Anne Smith; Carolyn Alene Smith-Hallam and Corryn Alyssa Smith Taylor and her husband, Michael W. Taylor.
He was the proud grandfather of four grandchildren; Kristopher Kraig Hallam, Caitlyn Emily Smith Guarnera, Sienna Rae and Camille Elizabeth Taylor and loving brother to two sisters; Dorothy Elaine Smith (Elden) Butcher and Mary Kathleen Smith (Larry) Cook as well as uncle to a host of nieces and nephews.
Merlin who was also known as “Smitty”, was born in Lafayette to Merlin Chapman Smith and Beatrice Broussard Smith on May 30, 1934.  He attended Cathedral (class of ’51) and graduated with a BS in Geology from South Louisiana Institute (SLI) in 1955.  A member of ROTC, he then joined the Air Force as a commissioned officer, eventually pursuing pilot training which segued into flying multi-engine planes transporting troops and cargo from Dover Air Force Base to the European Theatre and the Belgium Congo.  Following his assignment at Dover AFB, he attained a Master’s Degree in Geodetic Science from Ohio State University through the Air Force Institute of Technology Program.  His next tour of duty was Orlando AFB, FL where he met his future wife, Elizabeth.  His first assignment after marrying “Bettie” in April of 1965 was in S. Vietnam, serving bravely as a Forward Air Controller during the war.  Subsequent assignments followed at Eglin AFB, FL; Air War College, Montgomery, AL; Hickam AFB, Oahu, HI where he maintained several European Detachments; and Scott AFB, IL.  His last promotion was Director of Defense Mapping Agency in Glenn Echo, MD.  It was from there he retired in 1985 after 30 years of service and remained in Vienna, VA to continue raising his family.
In 2003, he returned to Lafayette where he once again enjoyed his Cajun culture.
Smitty never had a boring moment during his years of retirement.  His voice blended with every tenor section in several church choirs where he enjoyed the camaraderie from his fellow choir members.  Gregarious Merlin, dedicated to a strict exercise regimen, also formed many friendships at Sport and Health Clubs in North VA and, later, at Red Lerille’s Health Club in Lafayette.  His favorite hobby was bringing old friends together from every aspect of his life, organizing reunions with former Cathedral classmates for lunches at Don’s Hut, to the 56U Pilot Training and “Old Shaky” -C-124-Reunions in Dover, DE.
Merlin was a handsome, intuitive, cheerful, temperate, dependable patriarch of our family of girls and a steadfast friend to all who knew him.
Pallbearers will be Kristopher Hallam, grandson; Michael Taylor, son-in-law; Steven Butcher, nephew; and Brian Butcher, also a nephew.
A rosary will be prayed at 6 p.m. at the funeral home on Monday, Jan. 15.  The family requests visitation be held from 5 p.m. - 8 p.m. Monday and from 8 a.m. until time of services on Tuesday, Jan. 16, 2018. A reception following the service will be held in The Reminisce Room at Walters Funeral Home.
The family is requesting that memorial contributions be made to Hospice of Acadiana, 2600 Johnston Street, Suite 200; Wounded Warrior Project, P.O. Box 758517, Topeka, Kansas 66675. or Hometown Heroes.
Words of condolence can be expressed online at www.waltersfh.com.
Walters Funeral Home, 2424 North University Avenue, 706-8941, in Lafayette is in charge of funeral arrangements.

To order memorial trees or send flowers to the family in memory of Merlin Smith, Jr., please visit our flower store.