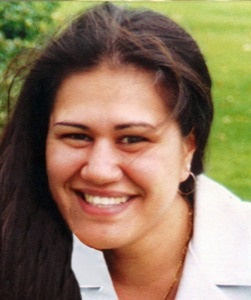 Nadine was born on January 6, 1980 to Nelson and Bernita Kaupu in Pahala, Hawaii. She graduated from Kau High School, Herzing University and Unitec College where she was named valedictorian of her class. On June 8, 2001 she married Jason Arabie in San Diego, California.

She served for four years in the United States Navy. She was a member of Victory Tabernacle Church of God and was an active participant in the choir. Nadine was a very loving wife and mother and enjoyed spending time with her daughter.

Nadine is survived by her loving spouse of nine years, Jason Arabie, their daughter, Noelani Arabie; her parents, Nelson and Bernita Kaupu of Pahala, Hawaii; two sisters, Summer Kaupu of Oceanview, Hawaii and Jaslynn Kaupu of Kailuakona, Hawaii; one brother, Nelson Kaupu of Oceanview, Hawaii; her grandparents, Loretta and Wilmet Lorenzo of Pahala, Hawaii; her mother and father-in-law, Susan and Rickey Cormier; one sister-in-law, Kristy Trahan and her husband Shane; and one brother-in-law, Dustin Cormier.

To order memorial trees or send flowers to the family in memory of Nadine Arabie, please visit our flower store.