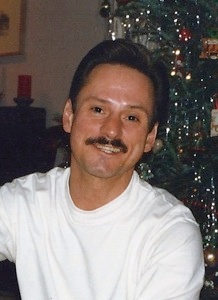 Perhaps they are not the stars, but rather openings in Heaven where the love of our lost ones pours through and shines down upon us to let us know they are happy.
- author unknown

A Mass of Christian Burial will be held on Saturday, January 28, 2012, 1:00 pm at the Cathedral of St. John the Evangelist for Patrick Barry Landry, 58, who died in Atlanta, Ga. on December 16, 2011. Father Chester Arceneaux, Rector of Cathedral of St. John the Evangelist, will officiate the ceremony. Musical selections for the service will be "Jesu, Joy of Man's Desiring," "Responsorial Psalm 23," "Pie Jesu," "Panis Angelicus," and "Ave Maria." Musicians include Lauren Baker, violonist; Jodi Bollich and Dave Domingue, vocalists; Tom Niel, organist; Will Green, trumpeteer; and Andrea Lowey, flutist. A private enurnment service will be held in Calvary Cemetery at a later date.
Barry is survived by his partner of 21 years, Don Halstead of Atlanta, Ga.; Fiona, his loving feline; two devoted sisters, Martha Kathryn _Tannie_ Landry Delcambre and her husband Jimmie of Delcambre, and Susan Landry Livingston and her husband David of Lafayette; nieces and nephews Howie Delcambre (Leigh Gilbert), Monica Delcambre (Kardell), Mysti Thibodeaux (Toby), Jenna Rader (Nick), Kim Laliberte (Dwayne), Beth Livingston, Marse Livingston, and Claire Livingston. Many great-nieces and nephews, cousins and friends, and his adopted favorite Ms. Verdice Delcambre were all part of Barry_s beloved circle of extended family.
Barry was preceded in death by his parents, the former Lois Spreafico and Patrick Maxim Landry; his beloved Odelia Babineaux _Non_ George and Christine, his loyal tuxedo feline.
Barry was born on July 12, 1953 in Lafayette, and was reared in Lafayette. He was a 1971 graduate of Fatima High School, and attended USL before receiving his degree in physical therapy from Texas Woman_s University in Denton, Tx. He lived and practiced in Texas for a while before choosing Atlanta as his home and professional base. Barry_s specialty was pediatric physical therapy. He founded the Individual Team Therapy Services for Children (ITTS for Children) in 1990 through which he worked with mildly to severely disabled infants and young children. His contribution to the field of pediatric therapy was widely recognized among his professional peers. True to his caring nature, much of Barry_s work extended far beyond clinical treatment and therapy. Barry instructed and engaged parents in at-home treatment plans designed to further maintain and improve quality of life for hundreds of his young clients and family members. Many children_s lives were changed because of the time and love Barry so willingly devoted to them and their families.
Barry studied in the Church of Religious Science in Atlanta. He was a strong supporter of animal rescue and the Atlanta Humane Society. Barry was also an arts and music enthusiast and supporter. He played concert piano; was well-traveled; and enjoyed books, movies, trivia and current events. His generosity benefited the needy, his friends and his family.
Visitation will begin at 10:00 am Saturday, January 28, 2012 at Walters Funeral Home, followed by a Mass of Christian Burial at the Cathedral of St. John the Evangelist at 1:00 pm. Immediately following the Mass, a reception in celebration of Barry_s life will be held at Walters Funeral Home at 2424 N. University Avenue, Lafayette La.
All expressions of support and sympathy are appreciated by Barry_s family. For those interested in memorial contributions, Barry supported Project Open Hand, 176 Ottley Drive, NE, Atlanta, GA 30324-3925, (404) 872-8089; and the Atlanta Humane Society, 981 Howell Mill Rd. NW, Atlanta, GA 30318, (404) 875-5331.

To order memorial trees or send flowers to the family in memory of Patrick "Barry" Landry, please visit our flower store.