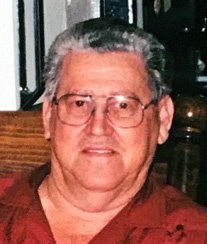 A Mass of Christian Burial will be held Saturday, September 28, 2019 at 11:00 a.m. in the Sunrise Chapel at Walters Funeral Home for Paul Arcade Gauthier, 89, who passed away September 26, 2019. Father Brian Taylor, Pastor of St. Genevieve Catholic Church, will be the Celebrant of the funeral mass and will conduct the funeral services. Delphine Lejeune and Julie Dauzat will be the lectors; Seth Gauthier and Brittany Burridge will be the gift bearers. Francis LeBlanc will provide musical selections. Interment will be in Evangeline Memorial Gardens.
Survivors include two daughters, Michele Guidry of Carencro and Yvette Burridge of Lafayette; one son, Paul (Charlotte) Gauthier of Rayne;  six grandchildren, Patrick Alleman, John David Guidry, Sherry Montgomery, Shawn Burridge, Brittany Burridge, and Seth Gauthier;  nine great-grandchildren;  and two great-great-grandchildren.
He was preceded in death by his wife, Lou Ella Mire Gauthier;  his daughter, Paulette Boyett;  his parents, Sidney and Louise Bienvenu Gauthier;  his grandson, David Burridge;  four brothers;  and two sisters.
Paul was a native of Lafayette, and worked as a wholesale deliveryman for Borden's Creamery. He served in the United States Air Force during the Korean Conflict, and was a member of the VFW Post 9822 in Judice, LA. He was also a member of St. Genevieve Catholic Church.
Pallbearers will be Paul Gauthier, Patrick Alleman, John David Guidry, Shawn Burridge, Seth Gauthier, and Nicholas Alleman. Honorary pallbearers include Samuel Gauthier and Bobby Fruge.
The family requests that visitation be held Friday, September 27, 2019 from 4:00 p.m. until 8:00 p.m., and resume Saturday, September 28, 2019 from 8:00 a.m. until time of service. A rosary will be prayed on Friday evening at 6:30 p.m.

To order memorial trees or send flowers to the family in memory of Paul Gauthier, please visit our flower store.