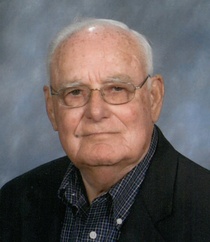 A Mass of Christian Burial will be held at 10:00 a.m. on Friday, December 12, 2014 at St. Genevieve Catholic Church for Paul Russell Olivier, 84, who passed away on Tuesday, December 9, 2014.   The Reverend Brian Taylor, Pastor of St. Genevieve Catholic Church, and Father Mitchell Guidry, pastor of Our Lady Queen of All Saints in Ville Platte,will con-celebrate the ceremony.  Interment will take place in Calvary Cemetery.

He was preceded in death by his parents, Annie and Albert Olivier, Jr.;  and three sisters, Annette Gallager, Josephine Duhon, and Marlene Matte.

Mr. Olivier served in the United States Army during the Korean Conflict, where he received a Purple Heart.  He retired from the Louisiana State Police after 22 years of employment, and from Gulf South Printing Company, where he was a partner in the business.  He was also a member of several civic and religious organizations.

The family would like to extend special thanks to Dr. Lester Ducote, and to the doctors, nurses and staff at Lafayette General Medical Center.

In lieu of flowers, please donate in Paul Russell Olivier’s name to the charity of your choice.
To order memorial trees or send flowers to the family in memory of Paul Olivier, please visit our flower store.