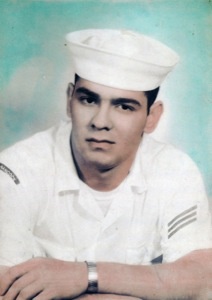 A Celebration of Life honoring Paul Avie Verret, Jr. of Carencro will be held on Wednesday, October 24, 2012 at 5:00 pm in the Sunrise Chapel at Walters Funeral Home. Deacon Jay Bergeron will officiate the ceremony.
Paul passed away on October 19, 2012 at Our Lady of Lourdes Regional Medical Center. He was 68 years old.
He is survived by his sister, Theresa Gautreaux of Carencro; three step-daughters, Annette Nunez of St. Martinville, April Sonnier of Commerce, TX, and Connie Boudreaux of St. Martinville; and one step-son, Anthony Tony Nunez of St. Martinville, LA.
He was preceded in death by his parents, the former Adelia Blanchard and Paul Avie Verret, Sr., six brothers, and three sisters.
Paul served in the United States Navy, and retired as a Boat Captain after many years.
Visitation will be held on Wednesday from 3:00-5:00 pm at Walters Funeral Home.

To order memorial trees or send flowers to the family in memory of Paul Verret, Jr., please visit our flower store.