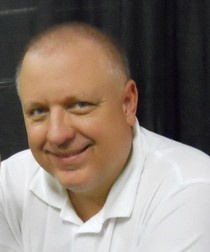 Philip (Flip) A. Lukinovich passed away peacefully on August 8, 2016 in Carencro, LA at the age of 57, after succumbing to brain cancer.

Philip (Flip) was born on February 27, 1959, in New Orleans, LA. He graduated from Northside High School in 1977 in Lafayette and from LSU with a Bachelor’s degree in General Studies in December 1984. His focus was Speech/Theatre and fraternity life!  He was an active member/leader of the TKE Fraternity. As a teenager, he earned the nickname of “Flip”. As a Key Club member in high school, he started working at the Lafayette Auditorium. Later, in 1992, he became an Event Coordinator for The Heymann Performing Arts Center (Auditorium) and worked there for the remainder of his life. Philip was a dedicated and loyal employee; passionate about his work, co-workers, and employees. Some of his other passions included: Batman, Halle Berry, Star Trek, The Beatles, cigars, fishing and history/movie trivia. He was well-known and liked for his easy-going demeanor, unique perspective on life; he embraced the differences in individuals. Philip was generous with his time, often playing the role of Santa Claus for his friends’ kids! He believed in finding fun in life, including the “fun” in funerals. Though, he will surely be remembered by all for his light heartedness and a smile that always made you feel just a little bit better.

He was preceded in death by his parents, Mary and Harold Lukinovich of Lafayette, LA.

Special thanks to Mike McGuirk and Lana Mixon for their support during this difficult time.

Funeral services are scheduled for Saturday, August 13, 2016 at 1pm in the Sunrise Chapel at Walters Funeral Home, 2424 N. University Ave., Lafayette, LA 70507. Visitation will be held from 9 am to 1 pm on the same day.  Flowers and condolences may be sent to Walters Funeral Home. Burial services will immediately follow at Greenlawn Memorial Gardens at 2300 N. University Ave.

To order memorial trees or send flowers to the family in memory of Philip "Flip" Lukinovich, please visit our flower store.