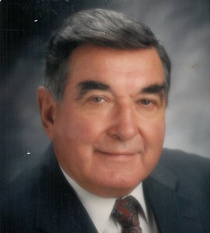 A Mass of Christian Burial will be held at 10:00 am on Wednesday, October 12, 2016 at the Cathedral of St. John the Evangelist Church for Ray Brignac, 86, who passed away on Saturday, October 8, 2016. Reverend Monsignor Keith DeRouen, pastor of Our Lady Queen of Angels Church in Opelousas will celebrate the mass and conduct the funeral services. Interment will follow the mass in Fountain Memorial Gardens.
Ray was born and reared on the family farm in Grand Prairie, La. in 1929. He graduated from Grand Prairie High School, earned his Bachelors Degree in Agriculture from Louisiana State University in 1950 and his Masters Degree in Agricultural Economics in 1958 while working full time for the Department of Agriculture.
First and foremost, Ray was a public servant. His career started in the milk industry with the Southwest Louisiana Pure Milk Producers Daily Cooperative in Lafayette. Over 14 years, he expanded the cooperative to 13 states and merged 14 milk cooperatives into Dairymen, Inc. In 1972, he left the milk industry to become the assistant director of the Department of Public Works during the Edwin Edwards administration, and later became the Assistant Commissioner of Agriculture. He served as the Executive Director of the Teche Vermilion Freshwater District of Lafayette, where he oversaw the daily operations of supplying fresh water to Bayou Vermilion and Bayou Teche until his retirement in 1995. He later became the chairman of the Teche Vermilion Board of Commissioners, and represented St. Martin Parish on the Atchafalaya Levee Board, working with the Army Corps of Engineers to improve flood control. He was elected to the Louisiana State Parochial Retirement Board in Baton Rouge in 1988 and served as vice-chairman for 11 years. He was also elected to the St. Martin Parish Soil Conservation Board and the St. Martin Parish Industrial Development Board.
Ray was an active sportsman, hunting deer and fishing in the Atchafalaya Basin and western United States. In his spare time he was a real estate broker, having developed subdivisions and commercial properties in Breaux Bridge. In his later years, he raised sheep and cattle.
All in all, Ray dedicated his life's work to improving the state of Louisiana. His leadership and call to serve will be missed.
He leaves behind to cherish his memory his son Mark Brignac of Lafayette; sister Geraline Brignac Fontenot of Grand Prairie; his brother, Russell Brignac and his wife Wanda of Ville Platte; and two grandchildren, David Brignac and Monica Brignac Carroll, her husband Tony, and their daughter, Bella.
He was preceded in death by his parents, the former Atile Morein and Ulysse Brignac; two sons, Mitchel Neil Brignac and Creig Brignac Sr.; two brothers Juan and Kernal Brignac; and mother of his children Ethelyn Fontenot Brignac.
Pallbearers for the service will be Brian Fontenot, Wayne Orillion, Tony Carroll, Jason Dupuis, Bradley Grimmett, and David Prochaska. Honorary pallbearers are Dee Stanley, Ed Sonnier, Donald Segura, Mike Detraz, and Tommy Thibodeaux.
The family requests that visitation be held from 5:00 - 8:00 pm on Tuesday, and resume Wednesday morning at 8:00 am until time of services. A rosary will be prayed Tuesday evening at 7:30 pm.
Special thanks are given to Acadian Hospice & Palliative Care, and his caregiver of many years, Brenda Christian, for their care and compassion shown to Ray.

To order memorial trees or send flowers to the family in memory of Ray Brignac, please visit our flower store.