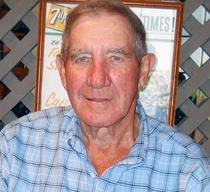 Catholic funeral services will be held Saturday, December 12, 2015 at 12:00 pm in the Sunrise Chapel at Walters Funeral Home for Robert A. "Bob" Bertrand , 86, who passed away December 10, 2015.
Father Gary Schexnayder, pastor of St. Elizabeth Seton Catholic Church will officiate the services. Musical selections will be provided by Julie Broussard. Entombment will follow the services in Greenlawn Memorial Gardens.

He was preceded in death by his parents, the former Mabel Lege and Paul Bertrand Sr.

Bob was a native of Meaux and resident of Lafayette for 57 years. He was a United States Marine who served his country honorably during the Korean Conflict. He was employed by Holsum Bread Company for 25 years, and owned Bob and Vi's.
Bob loved to garden and enjoyed sharing the bounty of vegetables with his family and neighbors. He was on his mower almost daily tending to his lawn. When he became too ill to keep up with the work, his kind neighbor Chris Thibodeaux did it for him, knowing how much it meant to Bob. The family sends its sincere gratitude and thanks to Chris for easing Bob's mind about his yard.

The family requests that visitation be held Friday, December 11, 2015, from noon until 9:00 pm, and resume at 9:00 am Saturday morning. A rosary will be led by Lucille Briscoe at 7 pm on Friday evening.
The family would like to extend a special thanks to Dr. Glenn Mire and the staff at LGMC for all the care and compassion they showed Bob.

To order memorial trees or send flowers to the family in memory of Robert "Bob" Bertrand, please visit our flower store.