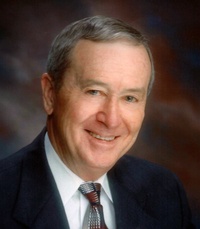 A Mass of Christian Burial will be held at 10:30 a.m. on Saturday, October 12, 2013, in the Sunrise Chapel at Walters Funeral Home for Robert Earl “Bob” Mouton, 78, who passed away on Saturday, September 28, 2013, at Buckner Villas Nursing Home in Austin, TX, surrounded by loved ones.  Reverend Gary Schexnayder, Pastor of St. Elizabeth Seton Catholic Church, will officiate the Mass and the Interment.

He was preceded in death by his parents, Charles Clay and Heloise LaCour Mouton, and sister-in-law, Clara Anne Comeaux Mouton, wife of Malcolm Mouton.

Robert was a twin, born in Ville Platte, LA and was a resident of Lafayette most of his life. He was a 1953 graduate of Cathedral High School and 1958 graduate of The Southwestern Louisiana Institute of Liberal and Technical Learning with a Bachelor of Science in Geology.  In May of 1958, he married Delores Young in Lafayette, LA and they moved to St. Louis, MO where he worked as a cartographer for the Department of the Air Force at the Aeronautical Chart and Information Center.  In August of 1962, he was honorably discharged from the Armed Forces, having served in the Army National Guard and on active duty at Fort Sill, OK.  Back in Lafayette he began a long and successful career in the banking industry having spent 22 years with Union Federal and then 18 years with Teche Federal Savings Bank, retiring in 2001 as Executive Vice President and as Director of Teche Federal Bank from 1989 to 2007. From 1994 to 2007, he served as a Director of Teche Holding Co. and as Director Emeritus from 2007 till death.  In 1979, he was honored to be President of the Louisiana Savings and Loan League, Southwest District and in 1985 he served with the Beaver Club of Lafayette, an organization very dear to his heart, as President.  A banker by career, he was a cowboy at heart making several trips to his beloved Montana, Wyoming, and West Texas to spend time on large working cattle ranches.  At the family farm he always enjoyed his well-loved horse and any opportunity to meet with the other cowboys in his life and do western things.  His final gift was to medical science in the hope that the study of his brain will bring answers to the quest to cure Alzheimer’s disease for future generations.

In lieu of flowers, the family requests that donations be made in Robert Earl Mouton’s name to the Alzheimer’s Association’s Capitol of Texas Chapter, 3520 Executive Center Drive, #140, Austin, TX 78731 or the De La Salle Christian Brothers, 1522 Carmel Drive, Lafayette, LA 70501 to care for aged and infirm Christian Brothers belonging to his brother’s religious order.

Sincerest appreciation to the Staff of Buckner Villas Nursing Home for the loving care and compassion given to Bob over the last four years and to Buckner Hospice and Glenn Shoemake, M.Div, their amazing Chaplain, who showed this family so much love and support in our time of grief.  Finally, heartfelt gratitude to Kim Marvel for her untiring efforts to locate a program that would accept Bob’s donation to Alzheimer’s research.  She was and is incredible.

To order memorial trees or send flowers to the family in memory of Robert "Bob" Mouton, please visit our flower store.