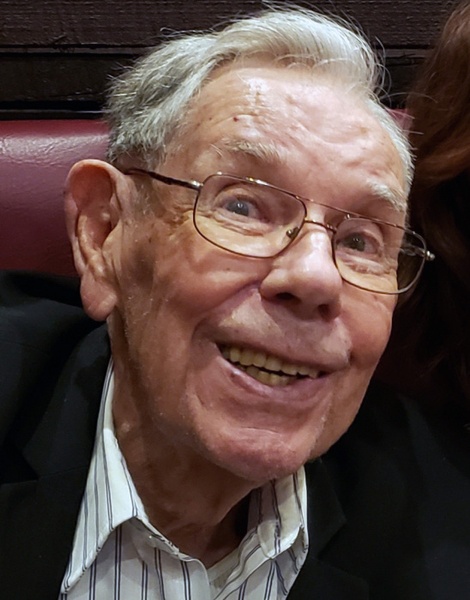 Rodney Ernest Guidry, Sr., 93, passed away on Jan. 14, 2021. Due to the Covid-19 pandemic, a private graveside service will be held at Greenlawn Memorial Gardens, with Father Joshua Guillory of St. Patrick Catholic Church officiating the service.
Rodney was born on July 18, 1927 in Opelousas, La. and grew up in Port Barre, La. He graduated from Opelousas High School, later attended T.H. Harris Trade School and studied  industrial drafting. Rodney lived in Lafayette after moving from Eunice, La. in 1957. He was employed for more than 35 years by Central Industries, Inc., an oilfield contracting company, and retired at age 65 as Vice President of Administration.
Rodney was an avid fisherman all his life, fishing with his best buddies Pat, Ben, and Byron until he was 91 years old. His favorite spots included Vermilion Bay, Tee Butte/Southwest Pass and Double Pipes, where he caught thousands of speckled trout, redfish, and flounder throughout the years. He was also an excellent gardener and hunter in his younger years, taking hunting trips to Texas, Mexico, and Belize. He was a longtime member of the Lafayette Petroleum Club, where he and his wife Mazie enjoyed attending Bingo nights. After Mazie's passing, Rodney began acrylic painting, completing over 75 pieces of artwork for his family and friends before his passing.
He is survived by his two children, Rodney "Rod" Guidry, Jr. of Lafayette and Deborah "Debbie" Guidry DePue of Savannah, Ga.; three grandchildren, Nicole Guidry Shields of Montgomery, Tex., Lydia DePue Moore of Savannah, Ga., and Emily Katherine DePue of Charleston, S.C.; and four great-grandchildren, Connor Shields of Dallas, Tex., Lilly and Caroline Shields of Montgomery, Tex., and Alder J. Moore of Savannah, Ga.
He was preceded in death by his wife of 60 years, Mazie Breaux; his parents, the former Edna Devillier and Isaac N. Guidry; his son, Michael James Guidry, who was killed in Vietnam in 1971; one sister, Bernice Guidry Janes; and one half-brother, Newton Guidry.
The family extends a special thank you to St. Joseph Hospice- The Carpenter House for their care, kindness and support, and to Rosewood Assisted Living Facility for providing him with a comfortable apartment, excellent care, and assistance during his last few years.
A memorial service and celebration of life will be held later this year.
Online condolences may be expressed at waltersfh.com.
Walters Funeral Home, 2424 N. University Ave., Lafayette, LA 70507; (337) 706-8941 is in charge of arrangements.

To order memorial trees or send flowers to the family in memory of Rodney Guidry, Sr., please visit our flower store.