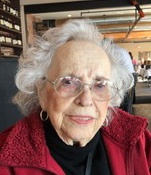 BENICIA, CALIFORNIA --  Shirley Johnson died peacefully in her sleep Friday, November 6, 2020 in the home of her daughter and son-in-law, Martha J. and Michael Trahan. Local services are pending at this time.
She was the only child born to the late Milton St. Martin of New Iberia and the late Lucille Monlezun of Lake Arthur. She married to Godfrey “Red” Johnson, Jr. November 8, 1946. He proceeded her in death January 12, 1978.
She is survived by two sons, Gregory Martin Johnson and his wife Marlene Sales Johnson of Rio De Janerio; and Patrick Edward Johnson of Colfax, La.; and one daughter, Martha J. Trahan.
In her early employment days, Shirley worked at Our Lady of Fatima School as assistant to the principal, Sister Sacred Heart. She decided to make a move to selling insurance and joined The Prudential Insurance Company. Later, to follow in her father’s footsteps, she was employed by The Daily Advertiser where her love of marketing was formed. After years of selling ads for The Advertiser, she was able to purchase Pauline’s, a ladies clothing store, and later realized her dream of re-naming it - Shirley’s. There, she worked with her mother, Lucy St. Martin, until Lucy retired at 90 years old. Following the demise of her mother in 1996, Shirley felt it was time for a change and closed the store. Still known by many and active in her community, she was hired by KPEL Radio and continued her career until the ripe old age of 84.
Shirley was associated with the ladies Mardi Gras Krewe of Attakapas for many years. Along with her love of traveling, on the local scene she lunched and played cards with “the girls” on weekend getaways. She enjoyed watching football games and hosting UL tailgate parties sponsored by the radio station. Ever the socialite, Shirley thrived in crowds of people whether strangers or friends.
She moved to Benicia in November of 2019 to be with Martha and Mike in a climate-friendly atmosphere. People in California took to Shirley like a Cajun takes to gumbo. She will forever be remembered. Rest in Peace, Shirley Johnson.

To order memorial trees or send flowers to the family in memory of Shirley Johnson, please visit our flower store.