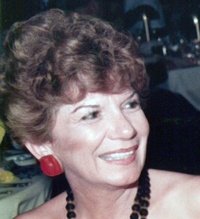 The ladies apparel industry mourns the passing of Tena Bright, a well-known Lafayette style icon.  Known for her own personal glamour, for decades, Tena was the "go-to" stylist for the women of South Louisiana.

A native of Oberlin, Louisiana, Tena came to Lafayette in the early 1960s, as a single parent with three young children.  One of Lafayette's premier department stores hired this dynamic, young salesperson from Lake Charles who had turned a Lake Charles clothing business around.  Due to the owner's  persistence, Tena was contacted and convinced to move to Lafayette to run the Young Teen Department on the second floor of Wormser's.  It was soon apparent that Tena's strength would be in ladies' ready-to-wear. She soon made a name for herself.   As her reputation grew with the customers, it wasn't long before LaParisienne, a distinguished downtown ladies fashion center, became Tena's home for the next decade.
With the oil industry booming the timing was right to leave the employment of others and start her own boutique, which she did in 1971 with her business partner, Flo Duhon.  Flotena's soon became one of Acadiana's premier fashion establishments located in the South College Shopping Center.
No longer answering to a more conservative employer, Tena's shop became a center for friends and customers of any race or gender as they sought Tena's fashion savvy to add to their personal wardrobes.  Buying at the markets in New York, Dallas and California, the fashion houses of Europe were now represented in Lafayette.  Tena dressed secretaries, clerks, wives of oil tycoons and drag queens alike.  Through her tenacity, Flotena's flourished and Tena enjoyed the success in her life she worked so long to achieve.
Leaving behind to miss her laughter and joie de vive, are her three children, Vic Perkins of Yorktown, Virginia, Bronwyn Sawyer and her husband Jack of Gulf Breeze, Florida, Lisa Gregg and her husband Paul of Las Vegas, Nevada; three grandchildren, Corey Perkins and his wife Lisa of Lafayette, Jett Evan Sawyer of Gulf Breeze, Florida, and Johanna Perkins of Yorktown, Virginia; two great-grandchildren, Addy and Sophie Perkins of Lafayette; and her sister, Faye Cutler of Bossier City, LA.  She will be sadly missed by her special friend, Lionel "Leo" Levesque of Lafayette, who so compassionately cared for Tena in her final years.
She was predeceased by her husband, William E. Bright, Sr., of Lafayette, and her parents Wilfred Guillet and the former Iler Reed. Three brothers: Shelton, Barney and Rusty Guillet and five sisters, Helen Veronie, Dessie Broussard, Elsie Sonnier, Jeanette Tracy and Frances Cloud.
A funeral Mass of Christian burial will be celebrated by the Rev. Steve LeBlanc, pastor of St. Pius X Catholic Church at 10 a.m. Wednesday, October 2, in the Sunrise Chapel at WALTERS FUNERAL HOME, 2424 N. University Avenue, Lafayette, LA.   Visitation will begin at 2 p.m. Tuesday, October 1, with a rosary being prayed by Deacon Jay Bergeron at 6 p.m. Friends and family are invited to a reception to follow in the Reminisce Room at Walters Funeral Home. Burial will follow the funeral in the private Reed Family Cemetery in Guy, LA.
Pallbearers will be Corey Perkins, Jett Evan Sawyer, Lance Hayes, Thad Hayes, Jack E. Sawyer, Paul Gregg and Tony Sonnier.  Honorary pallbearers will be William Bright, Jr., Casey Bright, Cody Voisin, Dr. Keith Sehon, Jeff Ray, Charles Milam, Dwight Bradshaw, Sonny Pickett, and Dave Pincus.
The family would like to thank Hospice of Acadiana and the staff of Cornerstone South for their compassion and attention given to Tena while in their care.
Tena loved her family and her friends and her humor was legendary.  She was an incredible cook, loved to entertain and her smile and presence lit up a room.
- she loved to laugh -
To order memorial trees or send flowers to the family in memory of Tena Bright, please visit our flower store.