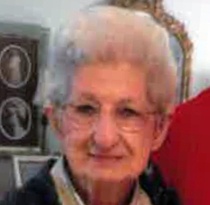 A Mass of Christian Burial will be held at 1:00 p.m. on Tuesday, February 28, 2017 at Walters Funeral Home in the Sunrise Chapel for Vesta B. Sellers, 90, who passed away on Saturday, February 25, 2017.  Father Gary Schexnayder, Pastor of St. Elizabeth Seton Catholic Church, will officiate the funeral ceremony.  Interment will take place at Greenlawn Memorial Gardens immediately following the services.

Vesta is survived by three sisters, Joycie Mae Begnaud of Scott,  Mrs. Jeanette  Dore and her husband Larry of Scott,  and Mrs. Lois Wiltz and her husband Sonny of Carencro;  and several nieces and nephews who looked at her as their second mother.

She was preceded in death by her husband, Dennis Sellers;  her mother, Letha Arceneaux Begnaud;  her father, Espera Begnaud;  one sister, Mrs. Hazel Hebert;  and two brothers, Raymond and John Harold Begnaud.

She was a resident of Scott, Louisiana for 80 years.

The family requests that visitation hours be observed Tuesday, February 28, 2017 from 8:00 a.m. until time of services.  A rosary will be prayed on Tuesday morning at 10:00 a.m.


To order memorial trees or send flowers to the family in memory of Vesta Sellers, please visit our flower store.