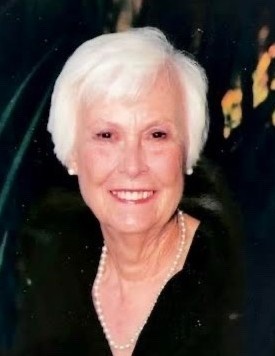 On Tuesday, September 21, 2021, we celebrate the life of Viola (Vi) Laffitte Aberly who passed away peacefully on Friday September 17, 2021, in Lafayette, LA. Viola was the only child of Adolph Laffitte and M. Elia DeSoto Laffitte of Carmel, LA where she was born on February 22,1919. Her ancestors were some of the original founders of Louisiana, many having arrived with Iberville in 1699. She grew up in Carmel, then moved to New Orleans as a young adult where she met and married Clinton Charles Aberly Sr of Crystal Falls, MI.

Vi saw many major changes in her 102 years of life. She grew up in the farming community of Carmel, located in Northwest Louisiana near Mansfield. She lived through the depression and WW II. She remembered seeing families with all their possession being pulled by a horse and buggy after being turned out of their house during the depression. Her parents were saved from that fate by one of her father’s nephews that happened to come by for lunch the day before they were to lose their house and farm. She was a young adult when they got electricity in the 30’s. It was exciting when electricity came to their area of Louisiana after the Tennessee Valley Authority provided electricity to the area. The first phone of the community was installed at her uncle’s house.

Her parents used a horse and buggy for transportation and mules for plowing the fields that her father worked when she was young. Vi had the job of bringing lunch to her father in the field.

Her paternal grandmother, ‘Grandma Betty’ Christopher Laffitte had a horse and buggy that she liked to ride in. Vi remembered that her grandmother always wore a black taffeta dress for church on Sundays and that she loved flowers. She gave that love of flowers to Viola. Viola was an avid gardener into her mid 90’s.

Viola’s father built their house, her mother cooked on a wood stove that she used into the late 40’s or early 50’s. There was no electricity or indoor plumbing growing up. For water a cistern was used, that was hooked up to the kitchen sink. They took baths in a big metal tub that was put outside with a second one to wash clothes over a wood fire. The family used an outhouse. When the family finally got a bathroom in the 50s, water still had to be heated on the stove to have warm water in the tub.

Many of Viola’s ancestors fought in the Civil War. Her father’s older brother owned a cotton gin and lumber mill with an associated company store for their workers. Viola’s grandmother owned a general store open to the community, that Uncle Friedrich and her father ran, when he was not out working his fields.

She was quite an active lady and was unafraid to try new things. While visiting her Aunt Mary DeSoto Pratt in Shreveport in her teens, she had her first airplane flight in a bi-plane with a visiting ‘barn stormer’. Viola briefly went to art school in New Orleans before marrying. Viola was a ‘Rosie the Riveter’ during WW II while living in CA where Clint was stationed. She was not afraid to try new things. She sold newly introduced paint rollers to the public at the department store, D. H. Homes, in New Orleans. As a young woman she also introduced Frito-Lays chips and bean dip in grocery stores in the early 60’s. Viola sold real-estate in her 50’s after moving to Covington when Clint retired.

Viola and Clint went to Mexico twice and later she took an art lesson in Chiapas, Mexico. After Clint died, Viola traveled to Europe, three times, Israel and to visit the site of the visitation of the Blessed Virgin in Medjugorje, Bosnia-Herzegovina.

Viola was an artist and exhibited her work in Covington and Mandeville before moving to Lafayette. She continued in her artwork into her late 90’s; she had a solo art show in a Lafayette gallery when she was 91.

Viola also loved dancing and was active in many clubs and fund-raising activities for charity over many years. Viola was a part of fun groups including a prayer group, a sewing group, and a martini group and held leadership positions in NARFE. Vi won many medals competing in Senior Olympics in swimming.

Viola was the matriarch of our large multi-generational family. She was well loved by family and friends, and will be greatly missed.

Services will be held at Walters Funeral Home, 2424 University Ave., Lafayette La. 70507. Visitation will begin Tuesday, September 21 2021 at 1pm. A mass will be celebrated in the chapel at 2pm. Visitation will end at 5:30pm.

In lieu of flowers donations in the name of Viola Aberly to St. Jude Children’s Research hospital. https://www.stjude.org.

To order memorial trees or send flowers to the family in memory of Viola Aberly, please visit our flower store.