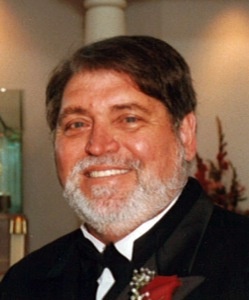 A Mass of Christian Burial will be held March 11, 2013 at 10:00 am in the Sunrise Chapel at Walters Funeral Home for Voris Lee Abshire of Lafayette, who lost his battle with brain cancer on March 7, 2013 at Southwest Louisiana War Veterans Home in Jennings, Louisiana. He was 66 years old. Father Gil Dutel, pastor of St. Edmond Catholic Church, will celebrate the mass and conduct the funeral service. Jodi Bollich will be the organist and soloist; Erika Trahan and Larry Thibodeaux, lectors; and Brett Abshire and Suzette Booth, gift bearers. Interment will follow in Greenlawn Memorial Gardens.
He is survived by his wife of nearly 44 years, Kathleen Leleux Abshire, one daughter, Suzette Booth and her husband David; one son, Brett Abshire and his wife Aimee; four grandchildren, Samuel Joubert, Cami Joubert, Meridith Abshire and Caitlyn Abshire; his mother, Marie Touchet Abshire of Kaplan; and one sister, Linda Abshire Leonard of Kaplan.
He is preceded in death by his father Elzay Abshire and childhood friend Harold Trahan.
Voris grew up in Kaplan as the only son of Elzay Abshire and Marie Touchet Abshire. He served his country in the Vietnam War from 1968-1969 as a member of the 101st Airborne Division. He earned several medals, including a Purple Heart, Army Commendation Medal, Air Medal, and Bronze Star. In his free time, he enjoyed camping with family and friends, watching westerns and war movies, and attending NASCAR races.
The family requests that visitation be held Sunday, March 10, 2013 from 10:00 a.m. - 8:00 p.m., and resume Monday morning at 8:00 a.m. until time of service. A rosary will be led by Larry Thibodeaux Sunday evening at 6:00 p.m.
The family sends its special thanks to Drs. Michael Cain and Brent Mahoney and their staffs, the Cancer Center of Acadiana, Heart of Hospice and the staff at the veterans home for all of their considerate help and support during this time.
Online condolences may be expressed to the family at waltersfh.com.
Walters Funeral Home, 2424 N. University Ave., Lafayette, LA 70507; (337) 706-8941 is in charge of arrangements.

To order memorial trees or send flowers to the family in memory of Voris Abshire, please visit our flower store.