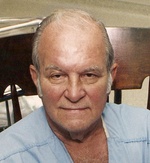 A Mass of Christian Burial will be held on Wednesday, May 1, 2013 at 1:00 pm in the Sunrise Chapel at Walters Funeral Home for Dr. Wilfrid G. Dolan who passed away on April 25, 2013 at the Regional Medical Center of Acadiana with his family at his bedside.

Father Gary Schexnayder, pastor of St. Elizabeth Seton Catholic Church in Lafayette, will be the celebrant of the mass and conduct the funeral service. Jodi Bollich, organist and soloist will perform "Amazing Grace", "On Eagles Wings", "Panis Angelicus",  "Shepherd Me Oh God", and "Ave Maria". Lector will be Lauren Richard and gift bearers will be Lisa Bordelon and Megan Raliegh. Entombment will follow in Calvary Cemetery. Dr. Dolan was a member of St. Mary's Church.

Dr. Dolan was preceded in death by his beloved and devoted wife of fifty-three years, Mary Jane Lee Dolan; his parents Mr. and Mrs. Edward L. Dolan; four brothers, Rev. George E. Dolan, C.M., Charles Norbert Dolan, John Vincent Dolan and Stephen Alan Dolan, all of New Orleans.
A native of New Orleans, Dr. Dolan has been a resident of Lafayette since 1955 practicing Obstetrics and Gynecology. In New Orleans he was a graduate of St. Stephen's Parochial School, Holy Cross High School, Tulane University (Pre-Med) and LSU School of Medicine in 1949.
Dr. Dolan was a veteran of military service having served in the U.S. Navy from 1944-1946 during WWII and again from 1949-1952 during the Korean War. He was a member of the U.S. Naval Reserve local unit for several years and retired from the U.S. Naval Medical Corps Reserve with the rank of Lt. Commander in 1958.

Dr. Dolan completed his internship at St. Mary's Hospital in E. St. Louis, IL in 1950 and his OB-GYN residency program at Charity Hospital, LSU School of Medicine in New Orleans from 1952-1955. He was appointed to Chief Resident in his last year of residency. In 1956 he became a member of the American College of OB-GYN (AGOG) and became board certified in 1960. Dr. Dolan began his practice in 1955 at which time he was also made Department Head of OB-GYN services at Lafayette Charity Hospital starting as clinical instructor for the LSU School of Medicine OB-GYN Department. In 1973 he was promoted to Clinical Associate Professor. He retired from private practice in 1994. Dr. Dolan was the Medical Director of the local plasma center Talecris from 1996-2013.

In 1972 Dr. Dolan promoted the perspective building of the present Women's & Children's Hospital, which was finally opened in 1983 with the efforts of most of the local OB-GYN doctors. In 1990 Dr. Dolan was recognized by The Daily Advertiser for having delivered over 10,000 babies. On April 2, 2009 the Lafayette Parish Medical Society honored Dr. Dolan for sixty years of community service.

The family requests that visitation be observed from 3:00-9:00 pm on Tuesday, April 30, 2013, and resume Wednesday morning at 8:00 am until time of services. A rosary will be led by Greta Pollock at 7:00 pm Tuesday evening at the funeral home.

The Dolan family wishes to extend thanks and appreciation to his office nurses of twenty years plus, Mrs. Virginia LaFleur, LPN (deceased) and Mrs. Rowena Johnson, RN for their faithful service; Mr. Hubert "Red" Dumesnil his banker; Mr. Mike Smith his insurance advisor; and Mr. Arthur D. Mouton his attorney. Special thanks to the ICU nurses at Regional Medical Center of Acadiana for their kind and gentle care. Dr. Dolan will be remembered for his love of family, friends and dedication to his patients and the community.

To order memorial trees or send flowers to the family in memory of Wilfrid Dolan, MD, please visit our flower store.